Making waves on the quiet: how submarines can avoid detection

One of the Australian Defence Force’s biggest secrets involves the location of its submarine fleet. The reason is compelling. Once detected, submarines have limited strategic, offensive or defensive capabilities. 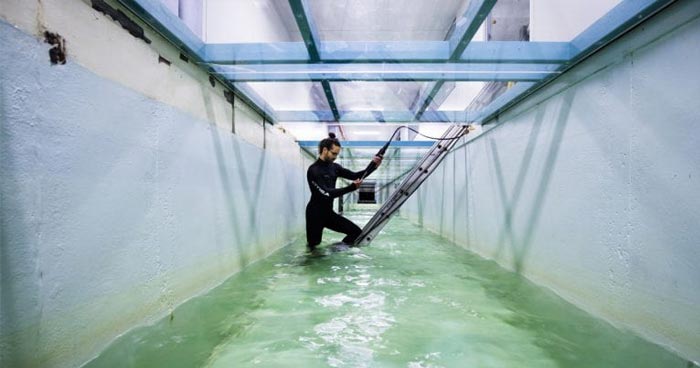 But how do you hide a massive submerged machine that produces a stream of disturbed water in its wake that becomes detectable once it rises to the surface?

The problem is a familiar one to Professor Jason Monty, the head of the Department of Mechanical Engineering at the University of Melbourne. He has been working closely with the US Office of Naval Research to study the dynamics of a submarine’s telltale wake and the project has been enhancing the understanding of how submarine wakes are formed.

Information about the way a submarine is travelling under water can now be ‘read’ from a wake’s hydrodynamic characteristics.

Professor Monty and his team are developing the underlying theory that will build the foundations for systems that will improve a submarine operator’s ability to reduce the detectability of its wake.

The discovery is timely. The stealth of submerged vessels is being challenged by new surveillance and space technologies. The University of Melbourne research outcomes will benefit Australian defence and forge closer collaborations between Australia and the US.

Professor Monty’s research team specialises in fluid dynamics. This is a field that makes important contributions to an astonishingly diverse range of endeavours – from medicine and defence to understanding nebulae in interstellar space.

We probably have one of the best suites of instrumentation in the world at our disposal for measuring anything related to fluid dynamics.

Fluid dynamics examines systems that flow, such as blood flow in blood vessels. It defines (mathematically) the processes that give rise to the flowing system’s core characteristics. In the process, novel opportunities are created to innovate practices with real-world applications.

We probably have one of the best suites of instrumentation in the world at our disposal for measuring anything related to fluid dynamics, Professor Monty says.

Included is a 60-metre-long water tank, built with glass walls, to permit towing experiments to be analysed by a technique called particle image velocimetry (PIV).

PIV involves infusing the water with tiny glass beads that light up using powerful lasers to reveal movement within the body of water. These hydrodynamics are captured with high-speed cameras similar to the Hawk-Eye system used in tennis tournaments.

PIV was developed in Professor Monty’s laboratory, but has since been adopted globally. However, he retains one of the best suites of PIV instruments in the world.

For the past three years, the US Office of Naval Research has funded Professor Monty’s team to define the fluid dynamics of a submarine’s wake using the PIV-enabled tow tank facility.

Traditionally, submarine studies were done in wind tunnels, relying on the fact that air and water behave similarly. The problem is that wind tunnels are short, whereas a submarine’s wake is long.

Our unique facility allows us to model and extrapolate what is happening about one to two kilometres downstream of a submarine, Professor Monty says.

PIV successfully captured the wake hydrodynamics of scaled-down models in the tow tank, including the moment when the turbulent wake of messed-up water hits the surface. This mimics the moment when a submarine wake becomes detectable in, for example, satellite pictures.

Our research aims to better understand the way submarine wakes are formed and to improve the ability of a submarine to remain undetected from surveillance systems.

The researchers then successfully modelled the wake’s behaviour from the experimental data, deriving mathematical relationships that have important implications; they will form the basis of predictive models for future development of tactics.

What we are ultimately working towards is a software tool for submarine operators, Professor Monty says. It will use information about the submarine’s depth, speed, water temperature and location to understand the distance to the point where the surfacing wake becomes detectable.This is called the ‘discretion distance’ and previously there was no way to anticipate its characteristics.

Our experimental results and modelling may one day be able to provide submarine operators with an unprecedented understanding of a submarine’s likely detectability under various operating conditions, Professor Monty says.