Academic and industry researchers came together at the University of Melbourne on February 18 for the Victorian launch event of the Research Network in Undersea Decision Superiority (RN-UDS) second round of funding.

The RN-UDS is a Defence Science and Technology Group (DST), Australian Department of Defence initiative that forms part of the Future Submarine Program Science and Technology Plan. It aims to establish a network of expertise in the academic sector around the “human element” of submarine operations to improve future capability. The University of Melbourne is a foundation university signatory to the RN-UDS member deed. 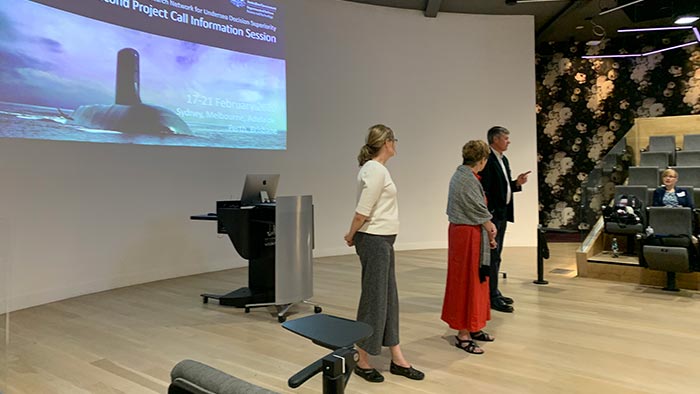 The RN-UDS facilitated three seminars where experts provided specific perspectives on Human Performance in the context of submarines. Leading these seminars were:

Across the three seminars topics ranged from operational perspectives to commentary on defence focused human factors research, with the speakers being joined following their presentations by RN-UDS Program Manager Sharon Humphris to take questions from the audience.

The international expert seminar and RN-UDS call for proposals information session was a fantastic opportunity for academics and industry researchers to share their knowledge of submarines and to gain an insight into the unique challenges that are faced by the humans that work within them.

Anchored by the announcement of a new funding call focused on early and mid-career researchers, the session promises to seed new and exciting innovation and the next generation of focussed experts in the Defence Human Factors discipline.

The University of Melbourne, through the Melbourne Defence Enterprise, was proud to host the event on behalf of RN-UDS and looks forward to seeing the continued growth of this important network of expertise.